The Huni Kuin of Acre and of the Eastern Peruvian Amazonian rainforest share a philosophy of life with many other indigenous groups that can be qualified as “ecosophy,”(2) one that attributes the majority of illnesses to the consumption of animals. Humans fall ill because the beings we hunt and fish, as well as some of the plants we consume, or other animals we attack or interact with, take revenge and send their nisun, headache and vertigo that can result in sickness or death.

Shamanism and the use of psychotropic drugs, like tobacco or certain vines, are used to uncover the actions of these invisible agents and to counter the capture of a human victim’s soul by the doubles of dead animals through the use of songs, blowing, perfumes and medicinal plants. The universe of the forest is thus inhabited by a multiplicity of species, all of them constituted as subjects, who negotiate their right to share this space and live within it. In this universe, the cosmopolitics of the human populations consists in killing only what is necessary, and negotiating with the masters of each species as well as with the doubles of their animal prey. There is an acute awareness that in order to live, one must kill, and also that each action, each predatory act, unleashes a counter-predation.

When the quarantine was announced in Brazil, my friend, the leader of the song of the vine, Ibã Sales Huni Kuin, called by phone to say goodbye: “ We will retreat into the forest, we are going to stay put, and we are not going to allow anyone to enter, because all of this is nisun.” He still knew nothing of the hypotheses on the causes of the new virus, which point in fact to a nisun from other forests. Even though the Huni Kuin were called the Kaxinawa, or bat-people, by their enemies, they do not consume these animals because they consider that they have yuxin, the power to transform forms. However, Ibã and his parents know all too well what a virus is capable of. In the past, imported viruses like influenza or smallpox caused more deaths among his people than the wars they fought during the time of the invasion of their lands.

The most commonly accepted scientific narrative at this moment – as deduced from the available open-access literature in this time of pandemic – attributes the new corona to the transmission of a virus from a species of horseshoe bats living in Chinese forests to human beings (3).This hypothesis is based on the sequencing of a genome from the COVID-19 virus and its great similarity to a virus found in these bats. Another animal that carries a genetically similar virus is the pangolin, a type of asiatic armadillo that is sought out in China both as a delicacy and remedy. One of the hypotheses is that these animals may have been intermediary hosts between the bat and human populations (4). However, the latest research shows that the bat virus is much more similar to the COVID-19 than the virus found in pangolins. Both animals are consumed in China and other Asian countries. The first cases of the new corona virus were detected in a big market in Wuhan, China, where live wild animals were sold, among them bats and pangolins, though their commerce is forbidden.

The “zoonotic spillovers” of viruses that live with other species in the wild without causing them harm to human beings, among whom they cause frightening pandemics, have neither started nor will they end with new coronavirus. Other recent epidemics like malaria, AIDS, or yellow fever also resulted from the spillover between forest and city. The problem is especially interesting for anthropology in general and ethnology in particular, because our discipline has been interested from the start in the complex relationships between humans and animals, Nature and Culture, city and forest. Pathogenic agents, who live in symbiosis with their animal hosts, can represent different degrees of danger  to humans, depending on the specific culture or society. The rules of diet and diplomacy that surround the activity of hunting point to an accumulated knowledge among the peoples of the forest as to the pathogenic potential of animals. Animals have their own proper habits and habitats that need to be respected if one doesn’t want the hunt to turn against the hunter. 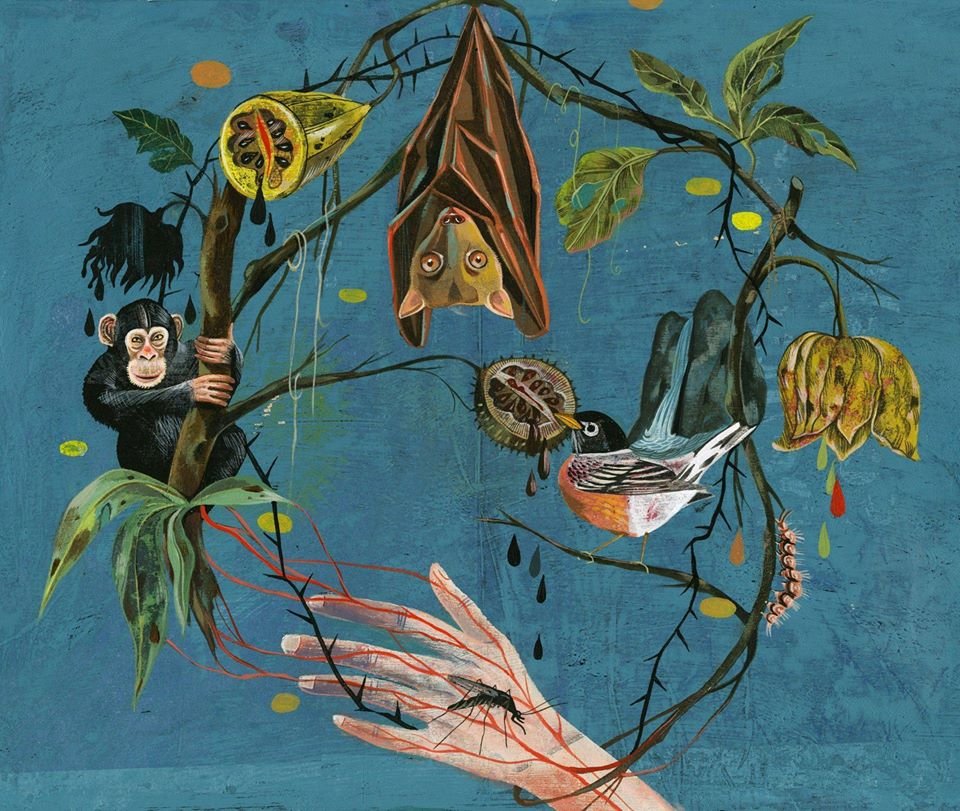 The novelty of these new epidemics, according to epidimiologists and biologists, consists in the speed at which the new virus travels and multiplies among humans, as a result of the great accumulation of beings of the same species in cities and in the transitional regions between cities and forests. The intense circulation of persons, goods, and animals that defines our contemporary reality is the perfect chronotope for this new global menace. This chronotope is accompanied by an increasing reduction of forest lands wherein animal hosts live with pathogenic viruses without falling ill or transmitting them to humans.

In an interview given on CNN (20/03/2020), titled “The bats are not to blame,” Andrew Cunningham, professor at the Zoological Society of London, states that: “the cause of the zoonotic spillover, or the transfer from bats and other wild species, is almost always human behavior.” The biologist then points out certain interesting characteristics of bats that can help us understand their importance and danger to humans. Bats are the only mammals that can fly, which allows them to cover great distances and disseminate many pathogenic agents. However they are also the most important pollinators of the tropical forest, and many species depend entirely on bats for their survival. In the Huni Kuin origin myth for cultivated plants, it was a squirrel transformed into a human being that taught agriculture to humans. The same squirrel, meanwhile, also knew how to transform into a bat. Bats, like humans, like to live in large groups, which facilitates the dissemination of seeds, pollen, and viruses. The bat’s flight requires a lot of energy, according to Cunningham, which produces high temperatures in its body, temperatures that in a human being would indicate fever. It is for this reason that the virus is so violent when it transmits to a human being. Another interesting fact is that, like humans, bats feel stress. When they feel that their habitat is endangered by deforestation or when large numbers of them are placed in close confinement in a market along with other animals to be sold and sacrificed, the increase in stress puts pressure on their immune system and can induce a latent virus to become more apparent and more contagious.

It isn’t the fact that humans eat game that causes epidemics. Epidemics result from de-forestation and the extinction of the animals that were previously their symbiotic hosts. Epidemics are also the result of the extractive relationship between city and forest. They flare up along the perimeters of threatened forests, in the interstitial spaces of interspecies friction, and from there, they are rapidly transported throughout the world by trucks, boats, and planes. It isn’t only wild animals in conditions of stress that cause pandemics, other animals also suffer and cause illnesses. Such are the animals that are prisoners of the interstitial area between forest and city, the rural heartland of the agro-business marketplace, notable for being at the origin of new violently virulent flus that can turn into pandemics. It is in the large-scale industrial swine and poultry farms that the so-called “swine” and “avian” flus arose, along with others that foreshadowed the current corona virus.

The great web that connects humans and non-humans is the cause and solution of the problem. We are living a problem together, on a planetary scale. Its solution must also be shared among us. It will come from an international and interdisciplinary exchange of information, but it will emerge above all from what we can learn from other traditions of thought that do not erect a dualist separation between nature and culture. The substitution of relational ontologies for a dualist ontology, based on the subject/object opposition, made the modernist and capitalist conglomerate possible along with its invention of a world-conquering machine, one that captures even the most resistant human and non-human minorities that survive along its margins within its gears.

The ontologies of these minorities, however, speak a language that contains vital knowledge for the planet today, and that we need to translate urgently into the language of science. As such, in her contribution to the conference “The thousand names of Gaia” (2014), Donna Harraway calls for a renewed awareness of how all beings, including humans, are composed of other beings and are tangled up in the dense weave of a becoming-with. Instead of inter-relationality, we are linked by an intra-relationality. We are entities that are composed of relationships, intercrossed by other agents and inhabited by different subjectivities. We are multiple and divided rather than individual, we are fractals. We are inhabited by beneficial and dangerous bacteria and viruses that wage interminable wars. These new scientific discoveries are moving closer and closer to what amerindian philosophies have been trying to teach us for some time: “ The notion of an entity placed in an environment can no longer be thought … We have what biologists call holobionts, a collection of entities taken together in their relationality that constitute an entity that’s able and sufficient to make it through the day.”(5)

The reaction on a planetary level to the new pandemic, which spreads through invisible droplets, transforms our bodies into invisible battlegrounds wherein it is at times the excessive reaction of our immune system to the invasion that kills our vital cells and destroys our organs. Or it could also be that when a system is overly stressed, it consumes itself. It isn’t eating pork, bats, chickens, or pangolins that causes global pandemics, but the way in which global capitalism, which feeds off the endless growth of cities at the expense of forests, trees, and their inhabitants, has stopped listening to the revolt, not of things, but of animals, of plants, and of Gaia. Or, in the words of Ailton Krenak, people have been alienated and torn away from an earth that is alive and with whom it is necessary to dialogue and live with (6). 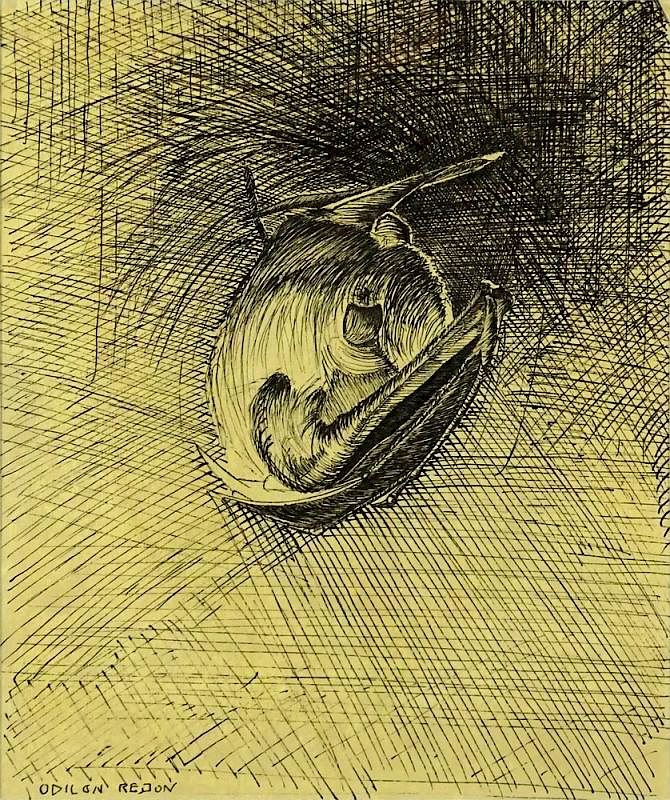 1. This text was first published in Blog of the Biblioteca Virtual do Pensamento Social (04/15/2020). A link to the original text in Portuguese by author Els Lagrou, Tenure Professor in Anthropology at the Universidade Federal do Rio de Janeiro, and docent and researcher in the Post-Graduate Program in Sociology and Anthropology, can be found at: https://blogbvps.wordpress.com/2020/04/13/nisun-a- vinganca-do-povo-morcego-e-o-que-ele-pode-nos-ensinar-sobre-o-novo-corona-virus-por-els-lagrou/ This text was translated into English by Julien Bismuth.