“The great powers, those who govern the world, whether they are kings or presidents, have forgotten that they are also human beings and that sooner or later the evil they do to the world will reach them, too; the diseases that affect us will also affect them. Sooner or later, they will suffer the same pain that we have suffered; but when that happens, it may be the end of the Comcáac. But let it be clear to you that no one owns this world. No one owns the sea, or the land, or the sky, or the clouds, or our lives, these have no owner …” (Pancho Largo Barnett, 2014)

For the indigenous communities that for decades have remained without fundamental rights, such as access to drinking water, education and health services, the current times of Covid-19 expose the open wounds marking the history of the poorest and most marginalized peoples in our America. In Mexico, the regions furthest from urban centers have registered a lower speed and number of infections during the first months of the pandemic. In the case of the Comcáac (the Seri people), they have been able to protect themselves very well from the threats coming from the colonizers. Their extensive knowledge of the territory and their nomadic culture provided them with a certain advantage over their enemies. The Jesuit chronicles highlight their courageous strength and agility to travel through the hot desert of today’s state of Sonora, where they still retain a third of their old territory on the central coast. For millennia, they have endured the high temperatures of the desert, where periods of scarcity and abundance have been part of their way of life to this day. After centuries of persecution, extermination and dispossession, the Seri people had to transform their nomadic way of life into a sedentary one, since somehow the revolution did them justice by politically giving them the ejido [communal land tenure], and thus they had to adhere to the development projects of the emerging republic.

These former coastal fishermen, who used reed rafts, became leaders and members of a socialist-style fishing cooperative for which they had to transform their ways of managing the territory and interacting with nature. On the other hand, the cultural assimilation policies derived from Mexican indigenism sought to standardize society through cultural homogenization. After decades of institutional abandonment by the State, access to basic services has been constantly denied to them; like most indigenous peoples and communities, it is still not possible for them to have a reliable and economic resource that provides them with electricity, a supply of clean water, schools and decent health services. Consequently to this day, the health of the Comcáac, like that of the majority of the Mexican population, is disrupted by an epidemic of chronic diseases, such as diabetes and hypertension. Recently, the first cases and the first deaths from COVID-19 are beginning to occur. The first reported deceased person apparently contracted the virus in the city of Hermosillo; he could not follow social isolation measures since, due to his deteriorated health condition from a chronic disease, he had to go use the medical services provided in the Sonoran capital.

The newly reported cases are due to the violation of social distancing measures. The hasty assembly that took place on June 14, in which around 300 community members gathered for the election of the President of Communal Property, may have been one of the main sources of infection. The political processes of the Seri people are characterized by conflicts of interest, where all family problems become political conflicts that radically polarize the population and therefore the families. All the Comcáac are relatives.

Another focus of infection could have been the insistent presence of New Age tourism in Punta Chueca, a phenomenon that in recent years has put the Seri people in the spotlight of neo-shamanic practices. This is a new tradition that feeds on the knowledge of the Comcáac elders, and the ritual and commercial use of 5MeO-DMT, a powerful psychoactive substance of animal origin. Like most “New Age” practices, its ideology relies on indigenous myths and rites in order to legitimize their presence in Western culture. The Boom del Sapo returned to the elders the joy of singing and composing new songs. However, now their followers put them in mortal danger. The elders and their songs are the center of the ritual intention of this neo-shamanic practice.

“Those people only come to cast their demons and diseases on our land, they call it healing, I call it hypocrisy. They don’t change at all.” (Mrs. Lidia Ibarra “The greatest artisan”, 2012)

In these times of health crisis, the Comcáac do not have any medical service that allows them to treat any illness. Although officially there is some kind of medical service, the dispensary in Desemboque does not have a supply of the necessary medications, and for months doctors have not visited the community. The presence of the virus puts a large percentage of population at risk, which is no more than 1,300 inhabitants in the two communities that make up the Comcáac Nation (the Desemboque and Punta Chueca). No doctor wanted to reside in the communities because they do not have the conditions or the necessary resources for their permanent residence, since they do not have enough supplies to set up a sufficiently equipped clinic. With the increase in cases in the state of Sonora in recent days and the strain of overflowing that it puts on hospitals, the situation is even more critical for communities living in the desert. The “best connected” town of the Comcáac is Punta Chueca, since it has a highway that connects it with Bahía Kino in approximately 40 minutes, and is located 2 hours from the city of Hermosillo, a municipality to which the town belongs politically. This situation facilitates their access to resources and to state and private food stores. However, for the Desemboque community, access is more complicated as they have to use either the dangerous highway 36, which has become an area of ​​violent encounters between local cartels, or the rugged dirt road that is the only access by land for this population. The Desemboque, as its name implies, is the river mouth of the Rio San Ignacio, which, in the rainy and hurricane season, overflows often leaving the population without any connection, electricity and without the possibility of receiving support either by sea or by land. The situation is critical, and without the intervention of the Army or the National Guard, the situation will be disastrous.

For the Comcáac, their only hope and the possibility of avoiding future crises are the young people who are prepared and are aware of their past. The new generations can be a great counterweight against internal corruption and the processes of dispossession by big businesses, academia and organized crime. In order to achieve this, I think it is necessary for the communication model with the federation to be replaced with new forms of articulation and intervention with the government apparatus, which are capable of breaking with the strong bureaucratization of access to resources. In this context, if one of the fundamental aims of the current administration is the structural eradication of corruption and poverty, I consider it essential to break with the top-down approach that still exists between the most remote peoples and the federation. This change would work together with the integral transformation of the educational model in Mexico, where the topics of greatest interest for the formation of new generations focus on the obligatory link between health and education from an intercultural perspective, which recognizes rural and indigenous youth as agents of social change and scientific innovation.

In this regard, the new Seri generations have changed their ways of constructing and conceiving their own world, without renouncing their ethnic identity. Since 2014, a new generation of young activists has defended their territory from mining companies seeking to impose their extractive megaprojects on sacred land. The “Comcáac Territory Defenders” mobilized through social networks to stop these projects. At the same time, new musical talents emerged, such as Zara Monrroy and Janeidy Molina, who sing their own style of rap songs which are powerful fighting hymns in the Seri language. On the other hand, in recent years more young people, including Instagram and YouTube influencers, have joined state universities. As ecologists, turtle specialists, botanists, entomologists and other fields, young Seri people are experts in their territory and traditions, whom have been able to perfectly combine with the ways of being in today’s globalized world. During June and July, the Comcáac celebrate their New Year, one of the most emblematic festivals in their tradition. Due to the pandemic and the increasing number of cases of infections, they have suspended their in-person celebration, but they replaced it with a virtual party of #challengehayeenipaii, a challenge on Facebook and Instagram that calls on the Comcáac people to upload their selfies with face paint (hayéen ipáii), which is characteristic of their most important rituals and celebrations, such as the celebration of the Seri New Year (or Hant cmaa quiih comcaac quih yaat).

“My heart is with my nation and, from where I stand, I raise our flag. For those who left and for those who are fighting. For our two communities I raise it again, so that its three colors cover the life of each and every one of those who were left with a great emptiness in their hearts. I am present, I am with you.” (Janeydi Molina, 2020) 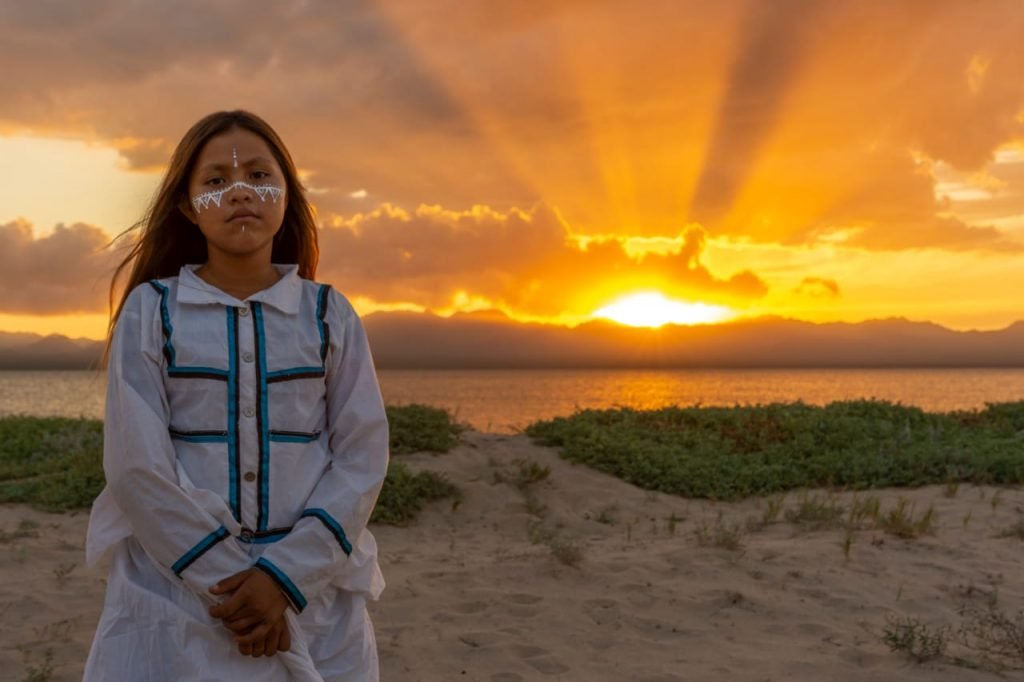